NMN vs NR: The Differences Between These 2 NAD+ Precursors 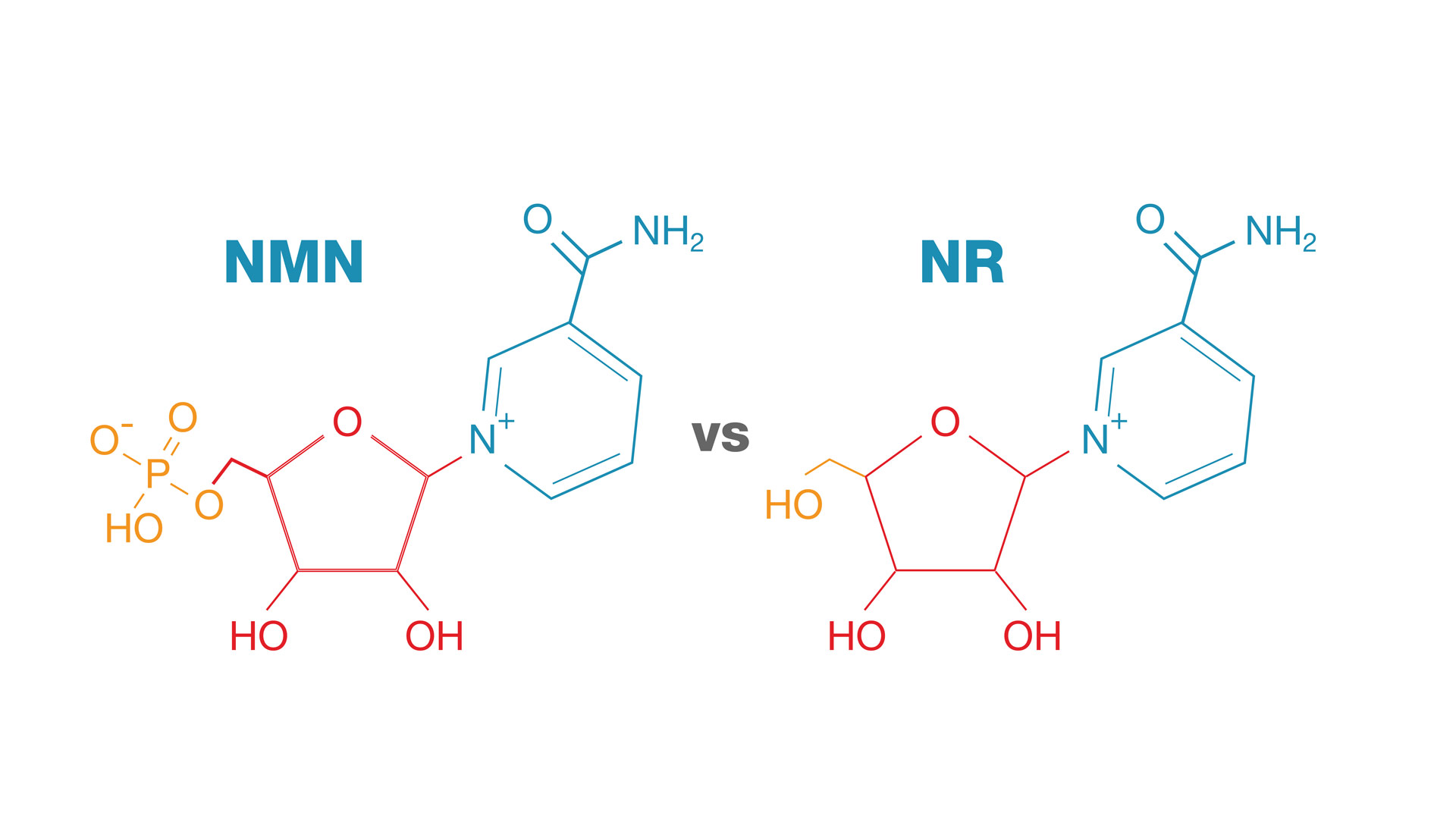 Nicotinamide mononucleotide (NMN) and nicotinamide riboside (NR) are biosynthetic precursors to an essential molecule for metabolism– nicotinamide adenine dinucleotide (NAD+). Numerous studies indicate NAD+ levels decrease significantly during aging, with restoration of NAD+ levels in aged animals extending lifespan and promoting health. Research on the two molecules indicates supplementation with either increases NAD+ levels during aging. What are the differences between these NAD+ precursor molecules?

Differences between NMN and NR relate to their molecular structures along with how cells biosynthesize these molecules to NAD+.

Differences between NMN and NR

The molecular structures of NMN and NR are roughly the same, except NMN has an added phosphate group. This added phosphate group makes NMN a larger molecule than NR. Some scientists believe NMN is too large to cross cellular membranes and must convert to NR before entering cells, where NAD+ biosynthesis occurs. Otherwise, NMN would need to get transported into cells by a transporter specific for NMN, such as Slc12a8.

How NMN and NR become NAD+ in cells

Once inside cells, NR gets converted to NMN via enzymes called ‘NRKs.’ Once NMN has been synthesized, the molecules enter the ‘nicotinamide core recycling pathway.’

A study from 2007 demonstrates NR substantially raises NAD+ levels in yeast. Further studies on the topic reveal NR increases NAD+ in mammalian cells up to 270%. These studies imply a special role for the salvage pathway of NAD+ biosynthesis involving NR and NMN in increasing NAD+ levels. The actual mechanism through which this happens remains unclear.

Scientists continue to debate which of the two biosynthetic precursors, NMN or NR, is superior regarding safety and efficacy. Due to the size of NMN, some scientists believe it must convert to NR before crossing the cell membrane to enter cells. Once inside cells, NR would convert to NMN. If this scenario provides the full story, the more efficient precursor would be NR.

Scientists from Washington University School of Medicine in St. Louis recently provide compelling evidence for the existence of a specific transporter for NMN in the gut of mice called Slc12a8. A transporter is a protein which allows the smooth passage of a molecule across a cellular barrier, such as a cell membrane.

Genomics data, which analyzes entire gene sets of humans, indicate the gene encoding this transporter exists in humans. The question is whether the transporter gets expressed in humans similar to mice, thus allowing NMN transport across the cell membrane. According to a genomics database, which examines entire gene sets of humans, SLC12A8 is expressed in humans “…with highest levels in small intestine, stomach, testis, thyroid, and colon.” Thus, the possibility exists this NMN-specific transporter is expressed similarly in the gut of humans and has a similar role in NMN absorption as well.

Confirming this NMN-specific transporter’s expression pattern in the gut of humans will require further research. If studies confirm a similar expression pattern of this transporter for NMN between mice and humans, the possibility remains NMN constitutes the more efficient and effective precursor compared to NR.

Given NMN’s and NR’s strong track records in boosting NAD+ and their roles as potent NAD+ precursors, what do scientific studies say about safety and efficacy of these molecules? What about storage conditions for maximizing efficacy?

Safety of NMN and NR

Whenever an individual starts consuming a supplement, safety is a primary concern. According to studies performed thus far, no safety concerns exist for NMN or NR consumption. The following will review a few studies of safety of NMN and NR.

A study of men in Japan finds no safety concerns following a single, oral administration of NMN at doses of up to 500 mg. Scientists in this study find no changes in heart rate, blood pressure, oxygen saturation, or body temperature. As the authors of the study state, “The single oral administration of NMN was safe and effectively metabolized in healthy men without causing any significant deleterious effects.”

Studies have demonstrated safety of NR as well.

Since studies demonstrate safety of NMN and NR, what about their efficacy? One can use ‘bioavailability’ as an indicator of efficacy. Bioavailability includes measuring how supplementation with NMN or NR increases blood levels of these molecules and/or blood levels of NAD+ after administration.

Bioavailability of NMN and NR

A study on the bioavailability of NR finds human blood NAD+ can increase up to 2.7-fold with a single, oral dose of NR in one individual evaluated. The same study reveals a dose-dependent increase in blood NAD+ levels with 100, 300, and 1000 mg single doses of NR.

A more recent study on longer-term effects of NR indicates NAD+ levels increase dose-dependently at 100, 300, and 1000 mg NR doses. The increases in NAD+ levels are approximately 22%, 51%, and 142% for each dose, respectively, within two weeks of supplementation.

After an individual decides to consume NMN or NR as a safe and effective method for boosting NAD+ levels, he/she must know how to store it.

Stability and storage of NMN and NR

A stability analysis demonstrates NR is stable (does not undergo degradation) for up to six hours at room temperature and seven days at two to eight degrees Celsius. Regarding stability of NMN and NR, David Sinclair, PhD, A.O. of Harvard University says, “Make sure your NR and NMN is kept in the cold. If it’s just on the shelf and it’s not in a stabilized form, then it will degrade to nicotinamide, which is something you don’t want to take high doses of because we’ve shown in my lab many years ago that nicotinamide will inhibit the sirtuins, and PARP as well, and interfere with DNA repair.”