What is NAD+? | Why Is It Important? | NMN.com
AGING SCIENCE
EVERYTHING ABOUT NMN
STUDIES
NAD+ PRECURSORS
CONTACT
DONATE

What Is NAD+? | Why Is It Important for Health and Longevity? 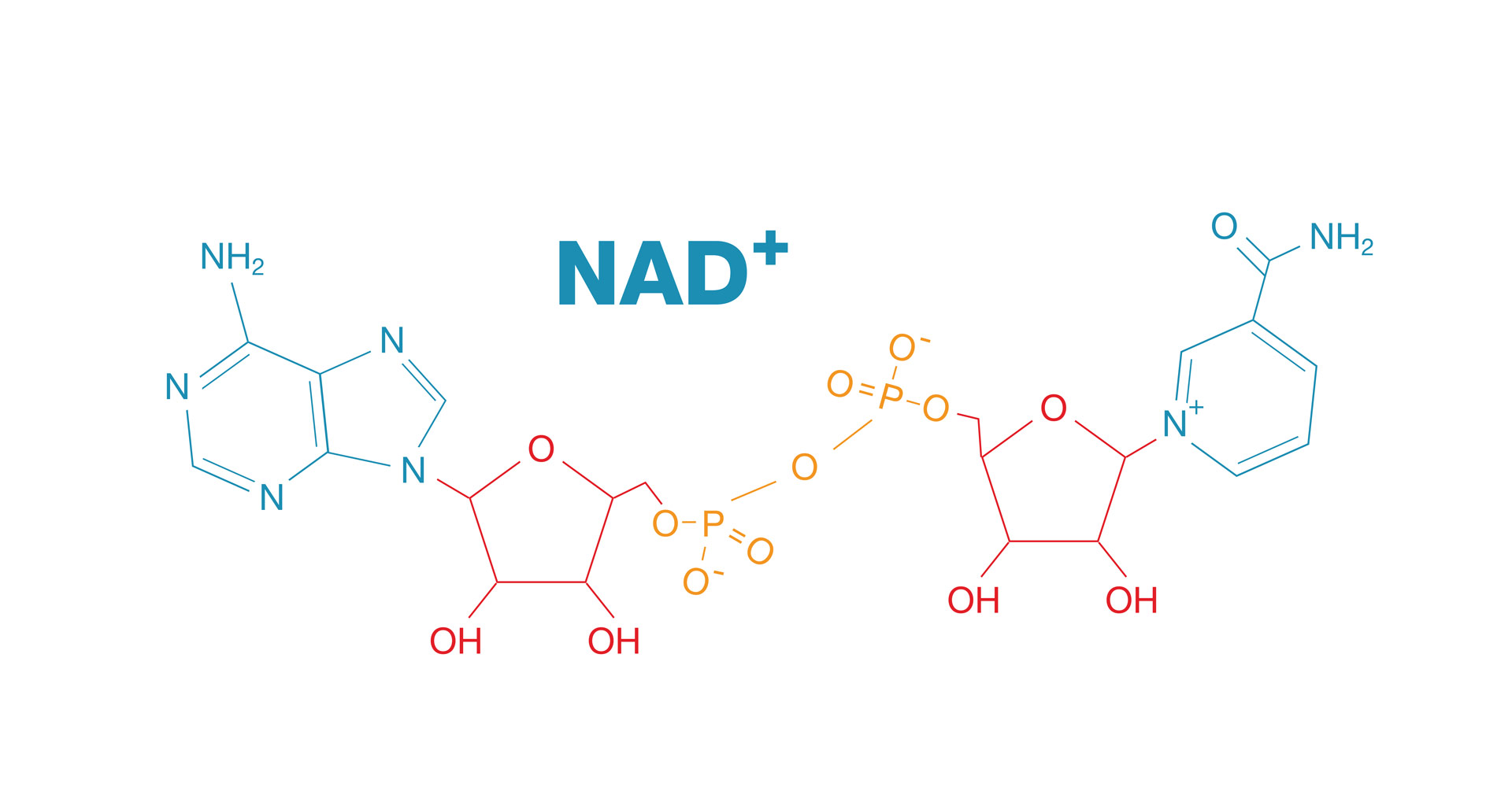 NAD+ stands for nicotinamide adenine dinucleotide. From single-cell organisms like bacteria to sophisticated multicellular ones like primates, NAD+ is one of the most abundant and crucial molecules. Basically, without NAD+, we would be on the fast track to death. The molecule is a linchpin to the function of the generators of cells — mitochondria. NAD+ not only helps convert food to energy but also plays a crucial role in maintaining DNA integrity and ensures proper cell function to protect our bodies from aging and disease.

How does NAD+ work in the body?

NAD+ works as a shuttle bus, transferring electrons from one molecule to another within cells to carry out all sorts of reactions and processes. With its molecular counterpart, NADH, this vital molecule participates in various metabolic reactions that generate our cell’s energy. Without sufficient NAD+ levels, our cells wouldn’t be able to generate any energy to survive and carry out their functions. Other functions of NAD+ include regulating our circadian rhythm, which controls our body’s sleep/wake cycle.

The damage to our genetic blueprint activates several proteins, including enzymes called PARPs. By consuming NAD+, PARPs can perform DNA repair functions. The depletion of NAD+ through PARP activation during aging appears to contribute to various diseases. Out of all these functions that require NAD+, many scientists believe that PARPs contribute the most.

Another class of enzymes that use NAD+ are called sirtuins. These proteins, which are linked to healthy aging and longevity, use NAD+ to regulate metabolism, maintain stable chromosomes, and repair damaged DNA. As DNA damage and chromosome instability accumulate with age, sirtuins consume more NAD+.

According to the plots above, reductions in NAD+ are seen as both men (left) and women (right) age. Here, the red line “a” represents how NAD+ levels change over a lifetime, and the blue where line “b” only takes into account NAD+ level changes post-puberty.

How is NAD+ made by our cells?

The process by which cells generate molecules is called “biosynthesis.” For NAD+, there are three known pathways: the kynurenine (de novo) pathway, the Preiss-Handler pathway, and the salvage pathway.

The kynurenine (de novo) pathway starts tryptophan, the essential amino acid that you often hear about during Thanksgiving for its association with turkey. Along these lines, tryptophan comes from food sources like meat, cheese, eggs, and fish. The conversion of tryptophan to NAD+ happens in the aqueous part of cells, called cytosol, which is outside of the cellular components (organelles).

What is NAD+ made of?

NAD+ is made of two nucleotides joined through phosphate groups. One nucleotide contains an adenine nucleobase and the other a nicotinamide.

Could these beneficial effects in mice apply to humans? Only clinical trials performed in humans will tell.

Which precursor supplement promotes higher levels of NAD+ in the body during aging, NMN or NR? The debate between scientists continues.

What happens when NAD+ levels are reduced?

Numerous studies demonstrate reduced NAD+ levels in disturbed nutrient conditions, such as obesity, and aging. Reductions in NAD+ levels can lead to problems with metabolism. These problems can lead to disorders, including obesity and insulin resistance. Obesity causes diabetes and high blood pressure.

Metabolic disorders caused by the low NAD+ level cascade down. High blood pressure and other heart function decline can send damaging pressure waves to the brain that may lead to cognitive impairment.

Preventing the decline of NAD+ offers a promising strategy to combat metabolism disorders with age. As NAD+ levels decrease with age, this can lead to reduced DNA repair, cellular stress response, and regulation of energy metabolism.

NAD+ is important for species’ mitochondrial maintenance and gene regulation regarding aging. However, the level of NAD+ in our body declines drastically with age. “As we get older, we lose NAD+. By the time you’re 50, you have about half the level you once had when you were 20,” says David Sinclair of Harvard University in an interview.

Known as the “guardians of genomes,” sirtuins are genes that protect organisms, from plants to mammals, against deterioration and diseases. When the genes sense the body is under physical stress, such as exercising or hunger, it sends out troops to defend the body. Sirtuins sustain genome integrity, promote DNA repair and have shown anti-aging related properties in model animals like increasing lifespan.

NAD+ is the fuel that drives the genes to work. But like a car cannot drive without its fuel, sirtuins require NAD+. Results from studies show that raising NAD+ level in the body activates sirtuins and increases lifespan in yeast, worms, and mice. Although NAD+ replenishing shows promising results in animal models, scientists are still studying how these results can translate to humans.

As the powerhouse of the body, mitochondrial function is crucial for our exercise performance. NAD+ is one of the keys to maintaining healthy mitochondria and steady energy output.

Increasing NAD+ levels in muscle can improve its mitochondria and fitness in mice. Other studies also show that mice that take NAD+ boosters are leaner and can run farther on the treadmill, showing a higher exercise capacity. Aged animals that have a higher level of NAD+ outperforms its peers.

Declared as an epidemic by the World Health Organization (WHO), obesity is one of the most common diseases in modern society. Obesity can lead to other metabolic disorders such as diabetes, which killed 1.6 million people around the globe in 2016.

Aging and high-fat diet reduce the level of NAD+ in the body. Studies have shown that taking NAD+ boosters can alleviate diet-associated and age-associated weight gain in mice and improve their exercise capacity, even in aged mice. Other studies even reversed the diabetes effect in female mice, showing new strategies to fight metabolic disorders.

The elasticity of the arteries acts as a buffer between pressure waves sent out by heartbeats. But arteries stiffen as we age, contributing to high blood pressure, the most important risk factors for cardiovascular disease. One person dies from cardiovascular disease every 37 seconds in the United States alone, CDC reports.

High blood pressure can cause an enlarged heart and blocked arteries that lead to strokes. Boosting NAD+ levels gives protection to the heart, improving cardiac functions. In mice, NAD+ boosters have replenished NAD+ levels in the heart to baseline levels and prevented injuries to the heart caused by a lack of blood flow. Other studies have shown that NAD+ boosters can protect mice from abnormal heart enlargement.

By 2050, the world’s population aged 60 and older is projected to total 2 billion, nearly double the number of 2015, according to WHO. People worldwide are living longer. However, aging is the main risk factor for many neurodegenerative diseases including Parkinson’s disease and Alzheimer’s, causing cognitive impairment.

In mice with Alzheimer’s, raising the NAD+ level can decrease protein build up that disrupts cell communication and increases cognitive function. Boosting NAD+ levels also protects brain cells from dying when there’s insufficient blood flow to the brain. Many studies in animal models present new prospects of helping the brain age healthy and defend against neurodegeneration.

Yes, it does. If you were a mouse. Increasing NAD+ with boosters, such as NMN and NR, can extend lifespan and healthspan in mice.

In fact, some anti-aging scientists like Sinclair consider the results in the animal study successful that they, themselves, are taking NAD+ boosters. However, other scientists like Felipe Sierra of the national institute on aging at NIH don’t think the drug is ready. “The bottom line is I don’t try any of these things. Why don’t I? Because I’m not a mouse,” he said.

To mice, the search of the “fountain of youth” might have come to an end. However, for humans, scientists agree that we are not quite there yet. Clinical trials of NMN and NR in humans may provide results in the next few years.

How to Increase NAD Levels

NAD+ levels can be naturally increased by promoting its synthesis — enhancing the enzymes involved in NAD+ biosynthesis or taking NAD+ precursor molecules.

Leading a healthy lifestyle through a healthy diet and moderate exercise is not only good for your mental health, but it can also boost your NAD+ levels.

Mild physical stress to the body such as fasting and exercise can stimulate the production of NAD+. In yeast, calorie restriction activates NAD+ dependent genes, sirtuins, and extends their lifespan substantially. Calorie restriction also consistently improved healthspan across different mice strains and sexes.

Many animal studies show that animals can also boost their NAD+ level through exercise. A recent study in humans finds that aerobic and resistance exercise can restore age-dependent enzymes involved in NAD+ synthesis in muscles.

One of the simplest ways to naturally increase your NAD+ levels and overall health is to exercise. Regular exercise can enhance the DNA-rebuilding proteins in your body, and keep you strong whilst maintaining a healthy weight.

Your body responds by producing more NAD+ depending on your daily workouts. Keeping in shape can help slow down the inevitable aging process.

Staying out of the sun’s harmful rays

You may be decreasing your levels of NAD+ if you spend too much time in the sun. Direct sunlight may cause your body to use a significant amount of NAD+ to repair damage caused by the sun’s ultraviolet (UV) rays from the sun.

To avoid skin damage, try to minimize your time outdoors while the sun is still out and always remember to cover up with lightweight, loose-fitting clothing.

Common heat sources, such as saunas, hot tubs, and heated pools may cause your heart to beat quicker, forcing your body to use more energy to keep cool. This triggers the increased production of NAD+ to supply essential amounts of energy.

People use NMN and NR as supplements to boost NAD+ levels. NMN and NR are biosynthesis precursors of NAD+. Similarities between these precursors include their usage of the “salvage pathway” of NAD+ biosynthesis. The two molecules are both safe for human consumption, too.

Why do people take NAD+?

People take NAD+ supplements for a variety of reasons, including enhancement in sports performance, a younger complexion and to fight age-associated diseases. Although some claim that the boosters made them feel young and energetic, others don’t see the same results.

Mounting evidence from animal studies may have fueled the hype on these therapeutic claims. NAD+ supplementation raises the bioavailability of NAD+ in cells, reversing age-related disease and modestly increasing lifespans in animal models. However, the question remains whether these findings from animal models translate to humans. Currently, no clinical trial has found evidence that the supplements have therapeutic properties in humans.

The Future of NAD+

For many, the aging of the world’s population can mean spending more time with loved ones, but it also comes with a burden of living with age-associated chronic diseases. In 2016, the nation’s health care treatment for chronic diseases totaled $1.1 trillion, according to the Milken Institute. Combined with the lost economic productivity, the total economic impact was 3.7 trillion — nearly 20 percent of the U.S. gross domestic product.

As the “silver wave” rolls in, a solution for age-associated chronic diseases to lift the health and economic burden becomes urgent. Scientists may have found a possible solution: NAD+.

Dubbed the “miracle molecule” for the capability to restore and maintain cellular health, NAD+ has shown various potentials in treating heart diseases, diabetes, Alzheimer’s, and obesity in animal models. However, understanding how studies in animals can translate to humans is the next step for scientists to ensure the safety and efficacy of the molecule.

Scientists aim to fully understand the biochemical mechanism of the molecule and the research on NAD+ metabolism continues. The details of the molecule’s mechanism may unveil the secret to bringing anti-aging science from bench to bedside.